NCPA 2/19: the Concert of Cristina Ortiz and the Facts Behind

The Moonlight Sonata became a deterrent to say yes. This was something that Cristina Ortiz had not expected.

The well-known piece of Beethoven was required to play on February 19 despite the fact that she had never played it in public in her music career of 50 years. It was only in the 1990s that Ortiz made a recording of it, but a live performance is by no means the same, let alone after an interval of so many years.

Ortiz once studied at the Curtis Institute in the 1970s with then-director Rudolf Serkin (1903-1991), who was also an authoritative interpreter of Beethoven. To the administration of China National Centre for the Performing Arts (NCPA), the legacy Ortiz inherited from those years has well qualified her for the piece. Another reason is the Moonlight is a superpower to boost box office — a fact in China unknown to Ortiz and untold to her until much later.

Feeling a bit odd though, Ortiz concedes. “He (the promoter) is right,” she says (more than once during the interview), apparently being no longer reluctant.

The unlined flexibility and affability in the music of Ortiz originate from her Latino blood. If there is a tinge in the recording of her three Beethoven sonatas (1998/RPO Record), then a spree in the recital on February 19. The Moonlight dimmed and gleamed while being ingeniously reined within “the classical”, from which the artistry of Ortiz was distinguished.

At the age of 67 — an “old age” as she defines herself, Ortiz has already freed from others’ comments. To her, piano playing is like face makeup, which is a personal matter and manner.

The first half of the concert closed in the Moonlight. Apart from the popularity of the piece in China, Ortiz might not have known that her piano recital has an educational significance, which in some ways outweighs the performance itself.

In this most populous country, “thirty million” is often cited when referring to piano learners. Although it has never been proved by statistics, one can hardly doubt it if noticing the numbers of young faces at the concert of Ortiz.

“While she (Ortiz) was playing just now, I saw the little girl sitting over there keeping moving hands like this,” an old lady beside me tells at the intermission. She also demonstrates me how the girl plays in illusion.

Yes, it is likely that Beethoven’s Moonlight is the piece being learned or going to be learned by many of the young attendees in the hall and Ortiz’s interpretation set them an example.

The second half of the concert began with the preludes of York Bowen. Unlike the compromised Moonlight, they are the truly beloved ones of Ortiz.

In 1950 — the year when Ortiz was born in Brazil, York Bowen (1884-1961) completed his 24 preludes in London. Honored as “the English Rachmaninoff”, he upheld Romanticism in his whole life despite being dismissed in the 20th century, and it was not until the turn of another century that his music — mostly unpublished — was excavated, studied, performed and recorded thanks to a group of musicians from his motherland.

About eight years ago, a Brazilian friend in Paris strongly recommended Bowen to Ortiz. “Cristina, this is your face!” He depicted as such, and it convinced her. Since then, Ortiz devoted to exploring the unsung English composer and the discovery was overwhelming, particularly the 24 preludes, which she likened to kaleidoscopes. “Every time when I play them, I feel more beautiful,” she says.

It was a pity that due to the time limit of the concert, not all the preludes could be presented to the audience. “Heartbrokenly”, Ortiz left half of them out, and the rest half (12 preludes) were arranged in a sequence from C major to b minor and played as a whole in 25 minutes.

It was the first time that the preludes were performed at NCPA — if not firstly in China. The dreamlike melodies were not distant. On the contrary, there seemed a similarity to Chinese Pomo (泼墨) paintings. So tranquil the concert hall was…

While it finished, many half-asleep children were taken out of the hall by their parents. It was 9 pm past. After about half-hour music, they were unable to be seated any longer.

The concert continued, from Debussy’s Deux Arabesques to Poissons d’Or and to L’isle Joyeuse. As soon as the last note faded out, there were audiences springing to their feet to cheer and give applause, and amid applause, Ortiz went off the stage and soon returned for curtain calls

Back to the piano and taking her seat, she politely raised a question, “Beethoven or Brazilian?”

“Brazilian!” A big sound popped out. Thanks to the answer, the audience had an opportunity to listen to Fructuoso Vianna’s Corta-Jaca. The electrifying rhythm, the gripping melody, and the meteoroid-like glissando were so coveted that if it had been in Brazil, a fire of dance could have been up already.

Ortiz seemed so satisfied after the encore. She walked around the stage to thank the audience and again went off and appeared again. This time she started a new piece straightaway, even before the applause stopped. It was Chopin’s etude Aeolian Harp. How graceful!

Chopin’s works are what Ortiz loves to share and the encore time gave her a chance.

A spectacular finale indeed. Just, too few children witnessed it. 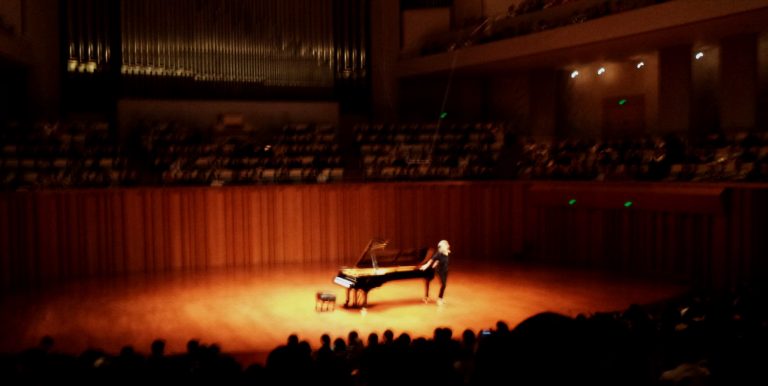 © TANTANYY
For Audiences, Artists, and Theatres